ClickUp’s “Virtual Productivity Conference,” LevelUp happened on December 9th, 2020. In it, they shared their 2021 Product Vision (lots of new ClickUpUse our ClickUp affiliate link! features coming!) and a fresh prespective on their marketing/growth plan.

Takeaway #1: WE’RE NEW AT THIS PLEASE BE NICE.

Tech glitches, poor moderation, non-Q&A, and strange audience targeting led to the event not living up to its (arguably quite vague) marketing.

The feedback about the current prioritization of new features has been heard loud and clear. Many talks focused on core values of listening and reiterated the importance of key enterprise features like reliability and speed.

ClickUp is hungry for that platform state. The unbundling/rebundling conversation, push for database use cases, coaching program highlight, live calls, increased support, flashy guests, recent hires and other Q&A all point to an enterprise focus.

Takeaway #4: WE’RE NOT SLOWING DOWN.

Highlights of new features seemed to repeatedly soothe the anticipated concerns of smaller users. The list of 2021 features mentioned include:

➤ ClickUp’s full replay of the event is available here. Q: Why do you were such colorful shirts?

Q: Do you remember when/why you started?

Summarized A: We were using a lot of tools — Sheets, Doc, Jira, Wrike. “All of these things are supposed to makeUse our Make affiliate link! you more productive but we’re really just wasting time.”

Q: What is the most unique use case for ClickUp?

Summarized A: “Rice farming in Indonesia to family chores…,” as well as, “a Slack replacement.”

Q: What are some of the experiences you’ve had with ClickUp that you’ve had to push through?

Summarized A: “Before we got our first paying customer we were wondering if anyone would pay…” then did our first promotion for Halloween and it went very well. Mistakes like the # of free Guests (when the Guest feature was released) was fixed within a day or two.

Q: Why is customer experience important to ClickUp?

Summarized A: I had some bad customer experiences when I was a kid and didn’t like them…so I didn’t want to do that.

Q: How has bringing on investors impacted how you make decisions and growing ClickUp and ClickUp’s core values?

Summarized A: “It doesn’t change anything.” We picked investors who wouldn’t make us grow too fast and help us stay focused on the users. “Nothing has changed it’s only enabled us to grow faster.”

So frustrating that all of these questions have already been asked to Zeb on countless interviews.

Q: How does ClickUp use ClickUp? (Audience Question)

Summarized A: There’s a blog post about it you can find. [He listed a bunch of features.] Also, “I see questions about replacing Slack but we’re not planned on doing that.”

Q: How does ClickUp iterate so fast?

Summarized A: I’ve answered this so many times in the past. The answer is iterating.

Q: How do we choose what features to ship?

Summarized A: Feedback (Canny) decided high-level roadmap and that’s combined with the internal vision for the product.

Summarized A: “It’s all about saving people time.” Continue expanding this around the world and get “All of your work in one place.” 2021 is the year we’ll realize that.

Q: Any plans for mindmapping in ClickUp? (Audience Question)

Summarized A: They’re there and we have plans to increase those.

Q: Why did ClickUp decide to take funding? (Audience Question)

Summarized A: Good question because that was never in our plans. “It’s not just about the money, it’s also the experience of people who have scaled software like this before.” Our investors are entrepreneurs — it’s very different than “money only” ones.

Q: How do you market ClickUp to reach so many people in a short period of time? (Audience Question)

Summarized A: All organic because we had to. Then, users helped us spread the world because it’s a viral growth due to the need for collaboration.

Q: Does ClickUp plan to build a platform to allow for third party tools to be integrated? (Audience Question)

Summarized A: Yup. We’re hoping Q2 2021 to allow you to build your own apps on top of ClickUp in Views, Tasks, and ClickApps.

Summarized A: Initially, infrastructure and reliability. Then, email inside ClickUp. Email in Custom Field in ClickUp + saved response + click button – > send email to that person. Hopefully next week. Google has been challenging to work with.

Q: If you were to write a book about your life, what would you call it? (Audience Question)

Summarized A: Assigned comments. (He thought of this feature.)

More and more plugs about “core values” — is this trying to stop concerns about the soullessness of having investors? Or is this preparing us for the announcement that may make the audience worry about these core values?

Lots of pitching by ClickUp Support team for the new coaching offered in-house by ClickUp. 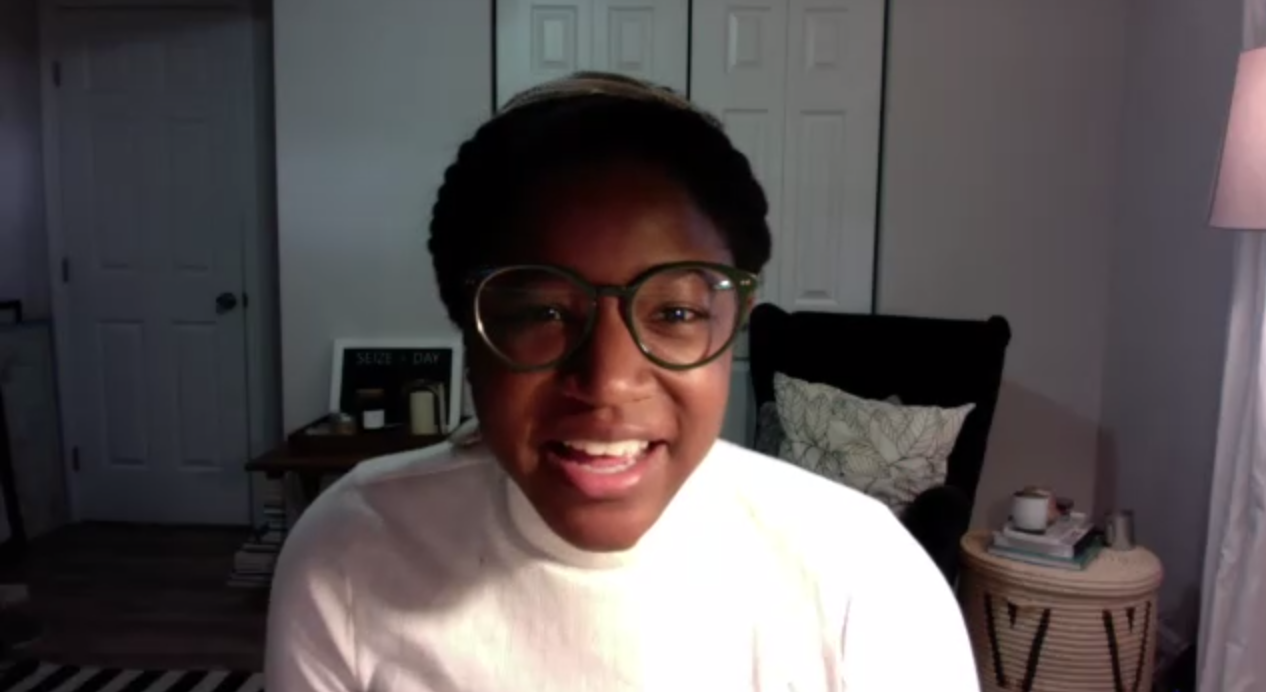 Yvi – Not training your team.

Courtney – Lean system by using Dashboards to communicate. Not sure if she just means skinny/simple systems?

Luci – I love Dashboards and I use Goals a lot to plan out my goals to see projects from a larger viewpoint. Also, link tasks to see percentage completion.

Q: How have you customized ClickUp to be 10X more productive?

Courtney – Don’t just use for tasks. “Lean out platforms we’re utilizing,” by making a CRM in ClickUp.

Luci – Dependencies [I believe she’s actually referring to remapping due dates?] so when a new client comes in I can remap Due Dates all at once.

Yvi – Yvi pushed back on the idea of replacing other tools with ClickUp. Way to go Yvi! Eliminating clicking around [context switching] for all tasks, tools, and resources.

Q: What’s the one piece of advice you’d give to people using ClickUp who want to LevelUp?

Luci – Figure out what works for you, then use templates.

Courtney – Don’t get scared and dive in. Look how you can use it beyond just tasks. Also, templates.

Q: What is your favorite ClickUp feature?

Q: How much time does it take to become a ClickUp expert at your level? How long have you been using the platform?

Courtney – Since 1.0; I liked that it updates often.

Q: What do we need to know about SEO?

Q: Tell me about your LinkedIn strategy?

Q: What’s your tips for not being scared about YouTube?

Q: Which platform is best?

<Insert a bunch of very easy-to-google tips he’s already made content about.>

Q: Repurposing content is a thing. What are some ways people can build a personal brand outside of social media?

Q: Should you talk about politics on social media?

Everyone’s different. I tend to avoid them because they’re polarizing.

You can. If you have more than 3 people in your marketing department, I would. Otherwise there isn’t enough time. Just make sure you’re only an expert inside your relevant subreddit.

Q: Are websites like Forbes, Inc, or local newspapers?

Get whatever you can — I’d focus on the smaller ones because you’ll be showcased more. Forbes, Inc., etc. don’t give you as much traffic as you’d think.

Create the content a platform lacks (videos on Facebook, for example) vs linking off the platform. Suggest going Live on Facebook to sell. Converts extremely well and eventually Facebook wants a cut of that.

Q: Instagram has a lot of stuff — IGTV, Reels, Stories, Posts. Can you talk us through Instagram?

I’m not even going to bother typing this out. He also suggested (1) collabs / join lives and (2) using swipe up.

Q: Should you DM for business?

I get more speaking engagements from LinkedIn > my website. Also more in IG > website…but website is where I’m getting leads. I agree DM is the new email.

Q: generic “content is overwhelming” emphathy Invite others in your space over to create content together on a Sunday. What do you do Monday morning?

Slice it up and put it everywhere.

Fun Fact: Gary Vee mispells on purpose because it leads to more engagement for pattern interruption.

It depends. I prefer morning.

At least once a day. generic tips around quality/quantity

Q: What would you say to people who have trolls in their comments?

Q: What if something goes viral? What should you then do?

(3) Post more frequently during that spike to capture more people during this time.

Q: When should we spend money?

For most people it won’t make sense. For businesses, whenever — they’re not expensive to start using at $100/month.

Kicks it back to Holly does a great job at keeping the energy up through this long back-to-back summit!

Solving the Challenges of the Productivity Industry: Q&A with David Sacks

Layla is a Vetted ClickUp Consultant who helps growing teams define their business workflows and translate them into a business instruction manual inside ClickUp. She spends most of her days teaching ClickUp, creating content, and providing unlimited feedback within the ProcessDriven Membership. The rest of the time? She's focused on creating value over on her YouTube Channel and free Facebook Group.

How to Use ClickUp Folders

8 types of data to organize in ClickUp (beyond just Tasks!)

Want to master your ClickUp?

Unlock our step-by-step course with personal support along the way.